Our Need For The Kingdom of Heaven

The Ever Increasing Darkness

Today, we live in an ever-increasing darkness where the lines have been so blurred morally, socially, and where the gospel that we walk in has been so compromised.  Voices have badgering us on multiple levels and from multiple directions attacking what was once normal and throwing us into the bizarre.  Raising an anxiety level solely designed to chip away at our souls as it tones us down spiritually.  Somebody out there is pulling on some serious strings, — and we're all feeling it !

This darkness, cloaked as the new norm, has square danced us into a cloud of confusion with a reality that is nothing close to the reality that the Lord has for us.  Many are adopting extreme positions based on information that was never out there twelve years ago.  Many have become agitated, many are confused, and many are walking in a false narrative that has smothered the masses.

Puppet Master Behind the Misdirect

In the past twelve years, — the open ground that was once available for any reasonable discussions, has eroded into the extremes where our boundaries for right and wrong have moved us way beyond what we ever thought.  Making it easier for darkness, and the puppet master behind it, to misdirect us from a target that was always meant to be.  This evil intent was designed to confuse the people, dumb us down, and control the masses.  It was carefully crafted to completely hinder us from walking in the clarity that the Lord has for us.

Darkness has dazzled us with the one hand while it manipulated with the other, directing us deeper into the compromising standards that are completely out of sync when it comes to the Kingdom of God, Kingdom of Heaven standard that Jesus clearly laid out during his three and a half years of ministry.

Plus we have pushed the boundaries more and more in our own beliefs, only to compromise more and more, leading us to argue more than we’ve ever argued in the past.  Meantime extremism runs over our values while the pride of life drives us over the cliff.  We have been directed into a slave mentality.  And this well tuned machine that has become a barrier of the overall truth on how we really need to be operating.

Darkness has cleverly spun an environment that is so stressful both naturally and spiritually.  And when we attempt to step out of the confusion, darkness tosses a few more grenades in our direction only to send us back into the rabbit hole creating a cognitive desistance.  This shift of behavior has created huge levels of mental illness all around us.

Now that the season of extremes have kicked into another gear, — the protective boundaries that we’ve guarded for years have been moved once again.  Cultural relativism and moral relativism has entered the arena eroding whatever boundaries we have left.  With the gate swinging in so many different directions, multiple groups have now compromised on their identity and on their positions.  And that is exactly what the adversary wants from us, ­— to engage in his false reality.

The whole agenda was for us to embrace the abnormal as the new norm, — raising up a whole new standard.  We have been caught in the middle of a battle and have accepted the aftermath as our new lifestyle.  This battle, this ongoing square dance was intelligently designed to create all kinds of havoc as we constantly fight our way through life, — instead of resting in a life that God originally intended for us.

As one who absolutely hates God, this adversary, — since being thrown out of office, has decided to attack Gods prized creation, Gods prized possession.  And that prized creation happens to be us.   To go after THIS part of Gods creation is the adversary’s way of putting a stake in the heart of God.  We have become the battlefield.  We have become the targets, — the very reason why Jesus proclaimed our need to pony up with the Kingdom.

This Kingdom has everything we need to help us win in the battlefield, pushing away the surrounding darkness, pushing away that cloud of confusion, and pushing away any spiritual deceptions that have engrafted themselves into our DNA.

For 2000 years the name of Jesus have been proclaimed but massive is the group that only know of him.  Thousands of world religions and thousands of denominations have all decided to jump into the mix and distort the message of the truth, the life, and the way!  To have us stand in one of the many versions of a compromised gospel, in some makeshift kingdom, was the adversary’s evil intent right from the very beginning.  Since the manger experience, he, the adversary, has fine tuned the art of deception, where the strings being pulled today, are a whole lot closer to home than we think!

Again, the target was to dumb us down in a belief system that has nothing to do with the Lords real intent.  We have been bum steered, and displaced from the fullness of a destiny that God originally had for us.  This erosion has desensitized us, and decieved us, from the norm on what God had originally intended for us both individually, and as a gathering.

Captivated by the Religious

The very part of Jesus in us, and the hope of God being glorified through us, has somehow taken a back seat today even from those who know Him personally.  The last thing darkness wants to see, — is for us to get in that Upper Room Environment and start walking with our Eyes Wide Open.  Presently, NOT many are sitting around the Lords campfire.  Sure many are sitting around, but only a portion, a remnant, are actually sitting around His campfire as friends of God vs those that know of Him, or have an acquaintance.  Many have been captivated by the religious distractions, becoming slaves to a narrative that will only get darker.  Why?  Because there is no real Solid Relationship.

Feeling depressed, guilty, ashamed and powerless is all part of his scripted narrative to steer us away from Gods good intentions as we just go with the flow moving in our busyness like bumper cars.  To run with the Kingdom is to run with the Father's business, which means getting us all on the same page.  The adversary has perfectly programmed his darkness to maneuver the masses where love, unity and relationships have become so distorted and misplaced where we have accepted the present scattering as the new norm.  Where our gatherings have more of a top down slotted feel to it than a teamwork gathering on the move as exemplified by Jesus and the apostles.

When I look at those who are around the ages of 14 to 40, I see a media that has fragmented their minds and hearts as it seeks all of their attention, and all of their time.  A highly organized darkness that wants all of their conscious awareness as it influences all of their decisions and all of their dreams, monitoring them day and night as it gathers all the needed intel to keep the misdirect going.  This cunning puppet master of media and drama has set the whole world square dancing on every level.

The crazy thing is we say we believe in Jesus but what the heck are we doing.  There is a huge gap between what we believe and what we are doing.  In our busyness we have completely bypassed the gap.  The adversary clearly sees the gap and fills that void every day.  He has skillfully scripted this darkness.  It is deeply seeded, and influences globally, — and things are about to get bad, real bad.

Breaking Away from the Spiritually Dead

The very reason why Jesus came with His Fathers Kingdom and Fathers Business is for us to breakaway from the spin cycle, and from the influences of the spiritually dead.  With what happened in the garden, — is the very reason why we live in this broken world where truth, light and the way have become rare commodities.  But Jesus came to restore all that, reconnect us, and get us back on track.

It always was the Fathers good pleasure to release us back into his Kingdom and get us off the hamster wheel.  The sacrifice was huge to get us to that place where we can actually receive the Kingdom.  A place where we can be renewed, revived, refreshed, released and re-established into who we were always meant to be.

Thy Kingdom Comes with Serious Hardware

And this Kingdom does not come our way empty handed!  This Kingdom comes with some serious hardware!  A complete tool crib full of gifts and minisrties including ministering angels who are all ready to help clear the way for us.  “ Thy Kingdom come thy will be done ” was the prayer that Jesus gave to set us free from ALL that is dark.

Born again, we now get to inherit and actually see this Kingdom in action as it realigns us, heals us, giving us that paradigm shift that we so desperately need, — a shift that also includes eternity as we are now find ourselves adopted into a whole new family.  A family that not only carries the Kingdom, but has all the legal rights to demonstrate it.

This Kingdom was all part of the salvation package, and because of that, we now get see things through a whole different lens and walk with a whole different perspective as Holy Spirit now enlightens us, and empowers us.  This Jesus, this powerful Son of God, came with a message backed by a powerful Kingdom, — and that is something that we seriously need to tap into!  Again, it always was, and still is, the Fathers good pleasure to give us the Kingdom!

Thy Kingdom Come, Thy Will Be Done Oh Lord ! 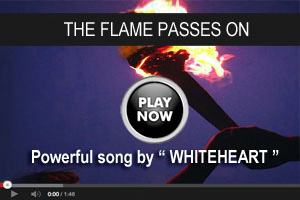