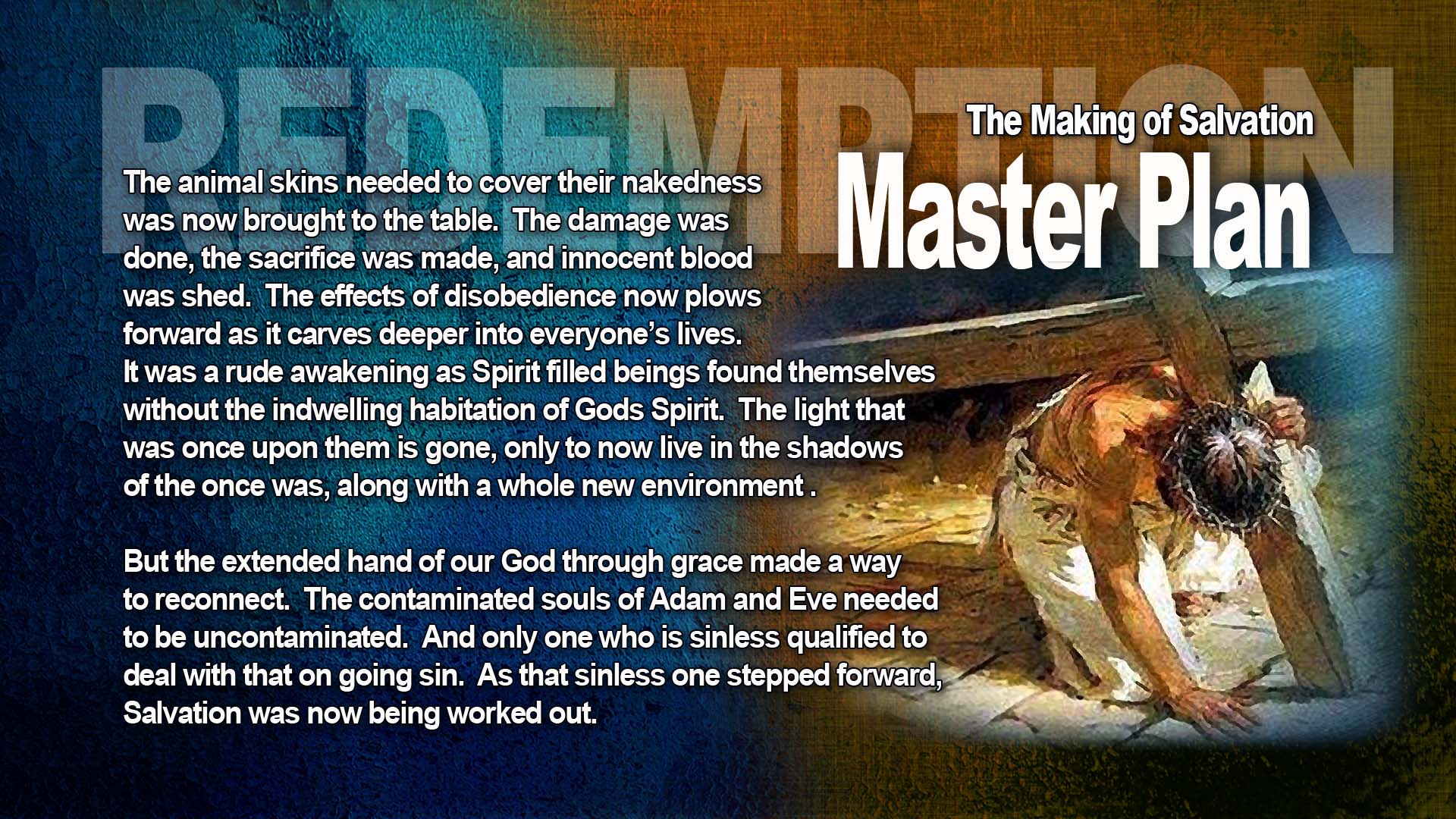 The Fathers Heart for Salvation

With the adversary sticking his head in the garden, it’s obvious he had plans to take the family of God in a whole different direction.

That rebellious one who was kicked out of the Kingdom of Heaven, stripped from his position, and rightfully displaced, now decides to displace everyone else as he retaliates while attempting to rule everything in sight.  Determined to put a stake in the heart of God, — he goes after the family. He sets the bait in the garden, deception struck and the family is now separated, not only from God, but also from God’s original intentions for the family.  For a Father who was real excited about expanding the family, — I can only image the good things He had in store.

This deception not only broke the heart of the Father, but also Adam and Eve as they wept before the Lord endlessly.  This very deception created a disobedience and a separation on Adam and Eve’s part that would absolutely derail the Fathers plans.  It was a shock to everyone.  The days of walking in the garden with their God has come to an end.  It ended for them and the chances of it showing up down the road for anyone else was slim and none.  Everything changed and I mean everything!

The devastating affects of taking the bait changed both heaven and earth.  According to heaven and how they roll, — the verdict is now part of our history.  The garment of light that completely surrounded Adam and Eve instantly faded as they now found themselves completely naked; shadowed by shame as the glorious light from the Father of lights has now departed.

The animal skins needed to cover their obvious nakedness was now brought to the table.  The damage was done, the sacrifice was made, and innocent blood was shed.  The ongoing domino effect of disobedience now plows forward as it carves deeper into everyone’s lives.  It was a rude awakening as Spirit filled beings found themselves without the indwelling habitation of Gods Spirit.  The light that was once upon them is gone, — only to now live in the shadows of the once was, along with a whole new environment that looks nothing like the original garden.

But the extended hand of our God through grace made a way to reconnect. He was not ready to let part of his creation go!  Our heavenly Father came up with the perfect plan.  The contaminated souls of Adam and Eve needed to be uncontaminated.  And only one who is sinless qualified to deal with that ongoing sin.  As that sinless one stepped forward, — the details of a covert operation called “Salvation” was now being penciled out.

The contaminated lineage of Adam and Eve needed saving and heaven was about to remedy that. We, who now walk in the disconnect, only add to the ongoing contamination by our own waywardness.  We are not deserving of being saved, but our heavenly Father decided to make a way for all of us.  The sacrificing of his only begotten Son was going to guarantee his families freedom. God absolutely loves his sons and daughters and is not about to let some fallen angel walk away with part of his creation.

The original DNA as intended by God has been altered, and we have been walking in that fallen nature ever since.  That alteration also included us being removed from the Fathers presence.  But by the grace of God, a way was made to restore that presence, — it was the Fathers perfect gift and perfect sacrifice.  That sinless one who qualified to solve the problem of sin has become the acceptable sacrifice that will complete the transfer of souls.

This Salvation, this Freedom, this Redemption, bought back the sons and daughters of God.  According to heaven, it was the perfect legal stand needed to reconnect the family.  For God so loves us that he gave his only Son, that whosoever believes in him shall not perish but have eternal life.

Redemption was set in motion and has been in progress for over 2000 years.  The decision for our Salvation now becomes a personal decision.  Heavenly Father came up with the plan, Jesus committed to the plan, Holy Spirit and the Angels are now directing us towards the plan.  We now need to make a personal decision about the plan.  According to heaven this is a good plan, — a Solid Rock plan!

Now that you know about The Masters Plan, — the prayer below is something that you might want to consider.

"Jesus, I want to thank you for dying on the cross for my sins.  I accept what you did for me – thank you Lord.  I open the door of my life and receive you as my Lord and Savior.  Thank you for loving me, thank you for forgiving me, thank you for eternal life. Take my life now Lord.  Mold me to be that person that you have always designed me to be.  Help me walk the life that you intended for me.  Thank you Heavenly Father for your love and for sending your Son!  Thank you Holy Spirit for getting my attention.  Jesus, — I ask you now to come into my life – change me, heal me and fill me Lord with your Spirit! "